Welcome to By Faith Ministries

I started By Faith Ministries in 2007. That’s 15 years. Fifteen years of writing and maintaining my website and some how it got corrupted, hacked, destroyed!  It just disappeared! It was enough to break the heart. It’s very easy to think when something like this happens that God no longer sees it as significant. That’s what Satan would have me believe, but my God has reassured me that this may be a time for new beginnings!

There are two ways to look at a significant loss such as a project you’ve given your faith, prayers, heart, mind and strength to. Either it’s time to let it go or just maybe it’s time do a new thing! Maybe God was offering me an opportunity to seek a new website host and software program that would allow me to do more fun and creative things all for his honor and glory!

Now to him who is able to do immeasurably more than all we ask or imagine, according to his power that is at work within us,    Ephesians 3:20

As you visit our new site you may find some links not working.  Don’t worry, they’re coming.  It might even be taking a little longer because I now have options!  I’m having way too much fun creating and deciding!

Thanks so much for stopping by. Please come back again and again! Enjoy!

Turkeys Don’t Fly Do They?

Doing the Difficult on Purpose

What’s so Good About Being Half Alive

Sometimes Jesus Has to Wait Till You’re Good and Dead

The Elephant in the Room

Someday My King Will Come

BECAUSE WE WERE HERE!

Corrie ten Boom believed that those who had suffered the effects of war, imprisonment, harsh treatment, cruelty, illness, and the loss of loved ones would believe her message that, “no pit was so deep that He is not deeper still”. WHY?

I think she knew they would believe her because she experienced the same treatment they had. She had been there and despite the harsh treatment she received, she could still love and forgive her enemy because Her God did it for her first. Therefore, she had the privilege and opportunity to experience just some of what her Lord and Savior Jesus Christ suffered for her. She was proud to share it with others if it helped them reach the same conclusion she had. God is under us holding us up; so never think your pit is too deep,” …He is deeper still.”

There is something so endearing when people allow themselves to be vulnerable by sharing their pain and struggles and ultimately what God revealed in its purpose!

John and Elizabeth Sherrill, the co-authors of The Hiding Place said it so beautifully in the preface of the book talking about the characters “…we wished these people were part of our own lives. And then, of course, we realized that they could be…”

God’s Word says it this way… (taken from Hebrews 11; as our name) These were all commended for their faith, yet none of them received what had been promised. God had planned something better for us so that only together with us would they be made perfect. HEB 11:39-40

Therefore, since we are surrounded by such a great cloud of witnesses, let us throw off everything that hinders and the sin that so easily entangles, and let us run with perseverance the race marked out for us. HEB 12:1 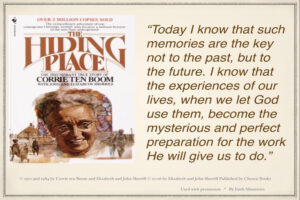 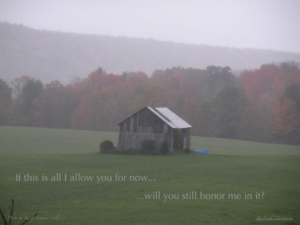 Therefore, since we are surrounded by such a great cloud of witnesses, let us throw off everything that hinders and the sin that so easily entangles. And let us run with perseverance the race marked out for us, 2 fixing our eyes on Jesus, the pioneer and perfecter of faith.  Hebrews 12:1-2